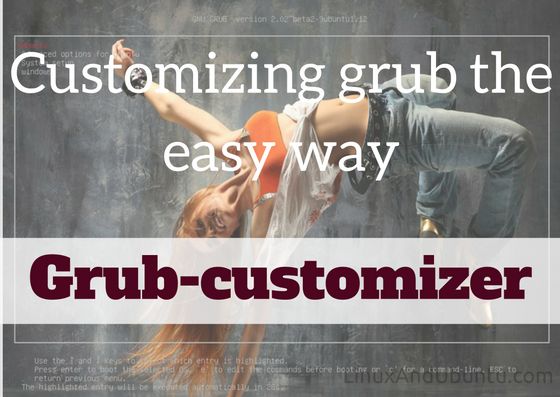 The first tab deals with the list of Operating systems to boot. At the top, we see the save button along with remove, edit, new and priority managers. We use the new entry button to add a new OS or kernel. The remove button to remove any unnecessary entries in the list. The edit button to edit a configured entry. Let’s add a new entry.

Grub ( GRand Unified Bootloader) is the default bootloader of Ubuntu, Mint and many major distros. But what is a boot loader? It is the first software that loads into memory after booting up. It helps in the selection of OS which we would like to boot into. It will then, boot the respective kernel or chainload another bootloader ( if it is not a multiboot supporting os or does not support grub like windows).

It can be customized and adjusted according to personal preferences, although, like most aspects of Linux, It requires some skill and some knowledge to do so. But again, the linux ecosystem is moving towards a world with Linux as a major desktop OS, which requires the development of a lot of GUI based front-ends for all utilities. And today, we talk about one such utility called grub-customizer. It helps in editing the grub configuration files using a Graphical User Interface. First, look at the grub that is by default installed by Ubuntu.

We need to add the ppa first.
Adding ppa and installing the application requires three commands.

You need to enter your password for sudo. Then, you will be asked for confirmation to add the ppa. Press enter to proceed.

Then, we need to update the lists by entering the following command.

Now, we install grub-customizer by typing the following command.

When asked for confirmation, type y, and press enter.

Now, launch grub-customizer from menu or dash or directly from command-line by typing –

The first tab deals with the list of Operating systems to boot. At the top, we see the save button along with remove, edit, new and priority managers. We use the new entry button to add a new OS or kernel. The remove button to remove any unnecessary entries in list. The edit button to edit a configured entry. Let’s add a new entry.

The first field is the display name of the entry. The second type of field is about the type of OS. Here, the options are Linux, Linux iso, chainloader, etc… For windows, we use chainloader. You can select the applicable partition. Click OK. But, remember that these changes are not saved until we click the save button on the top.

The kernel parameters which new users won’t be messing with unless you need to. For example, intel multi-core CPU has an issue of turning off the unwanted cores and then, causing the ubuntu to hang up and not respond. They need to add the “intel_cstate.max = 1” to the kernel parameters.

​In the last tab, We can select the font, font size, font color, the background of the font and a background wallpaper itself. This makes a huge difference than all the previous options.

I selected my favorite picture. It is important to have a nice picture popping up, as this is the first thing that you will see after starting your computer.

And the end result is this. Not the most beautiful, but, customized to my preference. ​

That is how we use a grub customizer. You can personalize your grub too, according to your personal taste.

How To Watch Hulu On Linux

how does none change the icon associated with an entry? the UI makes no damn sense